At the product portfolio level, we have already had the opportunity to identify Wheat Flour, and Wheat Flour Bran.

The products will be marketed on the basis of market prices. In this case, wheat flour is expected to be sold at USD 476.96 / t and wheat bran at market price of USD 216.80 / t .; these prices are valid for Year 0 of the project and are updated annually according to the estimated inflation considered in the general assumptions of the project, later.

The Angolan Government has sought to encourage the implementation of wheat milling to replace the relatively expensive flour imports, which amount to 696,000 tonnes of wheat flour from Turkey and the European Union annually.

The daily production of the largest current competitor (GMA - Moinho de Angola) of Moinho do kikolo, is 1200 tons per day, the GMA project, expects to satisfy 50% of the national demand for wheat flour.

The remaining available market share will be used by the remaining players in the market, including Moagem kikolo Luanda.

This is not a condition for the kikolo mill project, since it is expected that more and more wheat flour products will be consumed. such as the wheat pasta that is also at the base of Angolan cuisine, influenced by Portuguese cuisine.

For example, Angola imports 165,000 tonnes of spaghetti per year, resulting in high demand: the KIKOLO project will be in an appropriate position to increase production at regular intervals, and to provide excellent quality for spaghetti and to reach a relevant market share.

SWOT is the acronym for the English terms Strengths, Weaknesses, Opportunities Opportunities and Threats which is a very popular analytical tool in the business field.
In Business Administration, SWOT Analysis is an important instrument used for strategic laneing that consists of collecting important data that characterize the internal environment (strengths and weaknesses) and external (opportunities and threats) of the company.

SWOT Analysis is a tool used to make environmental analysis, being the basis of management and strategic lane in a company or institution.
This is an example of a simple system to position or verify the strategic position of the company / institution in the environment in question.
The following information should be included in the SWOT categories to analyze the company scenario:

• (opportunities) - positive externalities that can enhance the competitive advantage of the company. 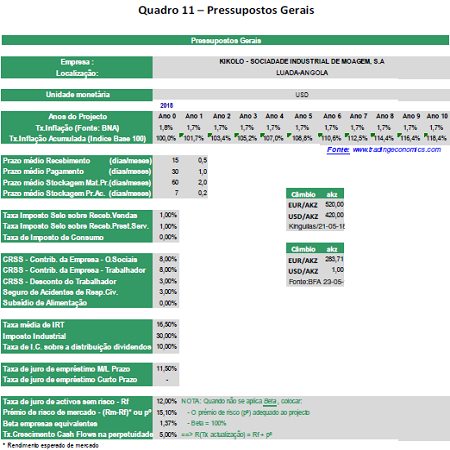 Throughout this approach, we will present an overview of the investment and financing plan, the production and operating plan, as well as the financial plan, which constitute the basis for the determination of economic and financial indicators.

In order to prepare and analyze the economic and financial feasibility of the project, the macroeconomic situation of Angola, which is currently in a transitional phase, has been duly taken into account, from a phase of cyclical deceleration, to a phase of some recovery.

The feasibility analysis of the investment project was supported by the analysis of some of the main valuation indicators, namely the NPV, IRR, and Payback period, resulting from the estimated financial statements, calculated for the 10-year period , as shown in the next point.

GENERAL ASSUMPTIONS OF THE FINANCIAL STATEMENTS

The following are the assumptions that led to the preparation of economic and financial maps of the feasibility study, in which we identified, among others, the exchange rates of the national currency, and the estimated inflation rates, which for the purposes of the present study (www.tradingeconomics.com), as this is the market of origin of the raw materials for the project.

We define the average terms of receipt, payment, storage of raw materials
and finished products, and transaction tax rates
economic conditions.
We have identified the contribution rates for the Angolan Social Security scheme, as well as the labor accident insurance rate, to be applied on wage costs, and also the average rate of Income Tax for the purpose of calculating withholdings to be carried out by the company, and to deliver to the State.
In addition, we have also identified the Industrial Tax rate to be settled on pre-tax income at the end of each year and the dividend distribution rate.
Finally, the bank stamp tax rate, the risk-free asset-rate and the market risk premium are presented, and it was agreed that the discount rate would be equivalent to 15.0%.

At the fiscal level, namely in the area of Industrial Tax, the assumption
considered that the activity in question will settle 30% of the illiquid results annually.
However, in the case of investments promoted through some Investment Support Programs, namely the Angola Investe Program, short-term tax benefits may be contemplated, which are translated into the payment of industrial tax rates, which are not the present case.